Roger bought five poppies which are planted in the garden in France, one for five soldiers who served there at some stage.

These are planted for his father (RAF WW2), his Uncle (RAF WW2), a distant relative (commemorated on the Canadian Memorial at Vichy ) and WW1 poet, Wilfred Owen. The final poppy is for Walter Pellant, his grandfather who served in the Royal Field Artillery/Mounted Military Police for the whole of WW1. 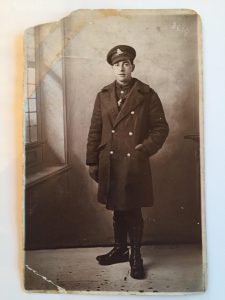 “Perhaps when I was growing up I did not show him enough ‘respect’. In our overlapping years (1950-1979) war veterans were not treated with the respect they deserved, the 1960s and 1970s were all about the future and not dwelling on the past. Thankfully things have changed for me and society in general.” 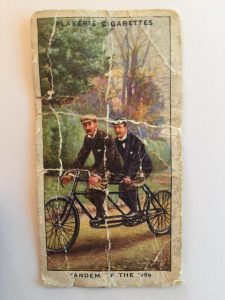 Roger’s family history is rich, his grandfather grew up in London in a family with French origins. His father (Roger’s great grandfather) was a renowned cyclist in the 1880s/1890s (see image left).

Walter’s lives in and outside of war were strangely intertwined. Walter volunteered as a Gunner in the Royal Field Artillery in August 1914 serving for the entirety of WW1, though at some stage he joined the Mounted Military Police, and was demobilised in June 1919.

The sporting gene had clearly been passed down to him by his father and he remained a Gunner (Gooner) after the war, playing football for (Woolwich) Arsenal (as he always called them). He only played for the reserves around 1920/21 but how things have changed. He worked in Covent Garden market in the morning as a porter and played for Arsenal (reserves) in the afternoon.

“We did have his boots, massive leather things with nailed studs. Perhaps his sporting prowess was restricted by the consequences of water/frost bite, and the rigours of 4 years of war?”

Roger’s grandfather died in a nursing home in Cheltenham in 1980, aged 90.

“I wish we had all spent more time listening to his exploits, as we would have a better understanding of the horrors he experienced in WW1”