Robyn’s grandparents were both from Seattle, but only met in France while serving in the First World War. 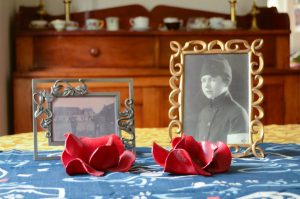 “I’m an American but I lived in the UK for four years. During that time, I had the opportunity, with friends and family, both of planting the poppies in the Tower moat and of collecting them at the end of the exhibit. We have since returned to our home in California where the poppies grace our dining table.

I purchased two of the poppies to honor my grandmother and grandfather, who both served in France during World War I. My grandfather was part of the engineers in the American Expeditionary Forces. He travelled overseas as a private and returned a sergeant.

My grandmother was a “hello girl,” a member of the Signal Corps Female Telephone Operators, where her Phi Beta Kappa Honours degree in French from the University of Washington proved useful. Although both came from Seattle, Washington, they met in France. Family history says they danced on the Champs Elysee on Armistice Day.”

See this Poppy on the map