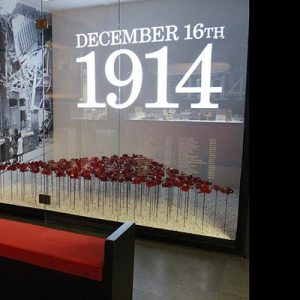 Hartlepool Borough Council purchased 130 poppies to commemorate the 130 lives that were lost on the 16th of December 1914, in the Bombardment of Hartlepool, one hundred years prior.

Since 2015, the poppies have resided at the Museum of Hartlepool, in a new permanent gallery and tell the story of the German Navy’s bombardment.

Four and a half months after the beginning of WW1, on Wednesday 16th December 1914, three German warships fired over 1,000 shells on Hartlepool and West Hartlepool.

“The German attack was part of a larger plan to lure the Royal Navy into the North Sea to be ambushed in a decisive sea battle. Germany hoped that frightening the British into leaving soldiers at home to defend the coastline would help to hasten the end of the war.”

Scarborough and Whitby, popular holiday destinations, and the Hartlepools were chosen as targets; the latter considered to be fundamental to war efforts, due to the major shipyards and marine engine works that resided there.

“Although the German ships were aiming at the major shipyards and industrial factories, shells also struck homes, shops and exploded in the streets. Many people were killed or seriously wounded while getting dressed or having their breakfast, on their way to work or school. Terrified by the noise and destruction, many fled clutching whatever they could carry. Refugees clogged the roads, looking for safety far inland away from the coast.”

The damage made to Hartlepool and the surrounding area was incomprehensible with buildings destroyed and many lives lost: 114 civilians, 9 soldiers and 7 sailors.

“Over 500 people were wounded, suffering horrific injuries including the loss of limbs. It was later said that no family was left unaffected.”

Private Theophilus Jones of the 18th Battalion Durham Light Infantry, a former deputy head teacher at St Aidan’s school, died in the bombardment from a shell explosion, and became known as the first soldier to die in WW1 from enemy action on British soil.

Councillor Keven Cranney, chair of the council’s Regeneration Services Policy Committee, opened the exhibition at the Museum of Hartlepool and stated that “The Bombardment of the Hartlepools was an event of massive significance, not only locally but nationally. I am delighted that the tragedy and heroism of that day has been commemorated in this fine and poignant exhibition”

See these poppies on the map