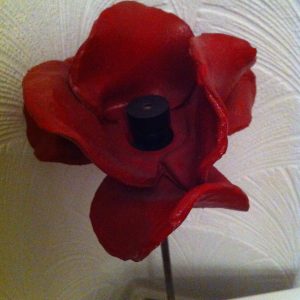 Dawn bought her poppy to honour her Great Uncle, John Milne, from King Edward in Aberdeenshire, who served with The Gordon Highlanders in WW1.

John, at the age of 19, was wounded in the trenches in La Boisselle and died from his injuries two days later. He was buried at Corbie Communal Cemetery in France. Dawn was sent a picture of his head stone from the Commonwealth War Grave Commission, and since then Dawn’s mother, who was John’s niece, made the journey to Corbie to visit his grave.

“Having the poppy means so much as it is a daily reminder of all these young men who gave up their future so we could have ours.”