Our journey into WW1 history began after my wife’s Grandfather James B Smith died in 19.82 He won a DCM on the 16th October 1916 at Schwaben Redoubt on the Somme with the Cambridgeshire Regiment. Like many of his comrades, he did not think he had done much to deserve it, just rescued a mate, all we had was a comment from his BiL that he won it on a quiet day for him. We did not have the citation, so after he died, my wife sent off for a copy for her father. This lead us to finding out where, and calling off on the Somme on a French holiday with them. We drove down a road near Albert, and saw Cemetaries for, British, South African, Rhodesian, Canadian, etc. We went to school in the era when WW1 & 2 were not taught about. We were staggered, and went on to learn more. Found Great Uncles who had died and were buried out there, visiting their graves, and also attended a 90th Anniversary of the Battle where he won his DCM at Ely Cathedral. we bought the Poppy. 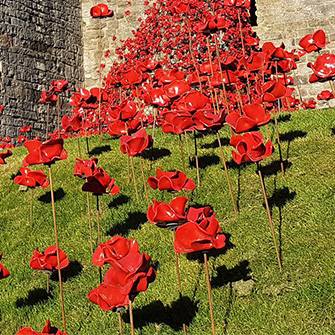